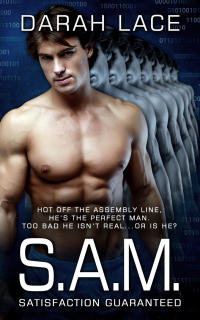 As the CEO of one of NYC’s top ad agencies, Emma Raines devotes her time to stomping the competition in five-inch heels. She has no time for a love life, and her sex life is limited to a quarterly hook-up with a west coast colleague. When her pent-up desire sends her to the discreet offices of Weston Inc., one glance at a picture of SAM—their newest Sexually Animated Male—and she’s dying for a taste of the more lifelike toy.

Sam Weston might be the genius behind the bio-mechanics of Weston, Inc., but the unexplained return of male sexbots by female customers has him scratching his head. When his cousin and co-founder cajoles him into a harebrained scheme to replace Emma’s order with himself, the nerd in Sam is convinced research outweighs deception. The Dom in him scoffs at the idea of normal sex. But one night of substandard vanilla sex later, he’s determined to take control and give the feisty exec the dominance she craves.